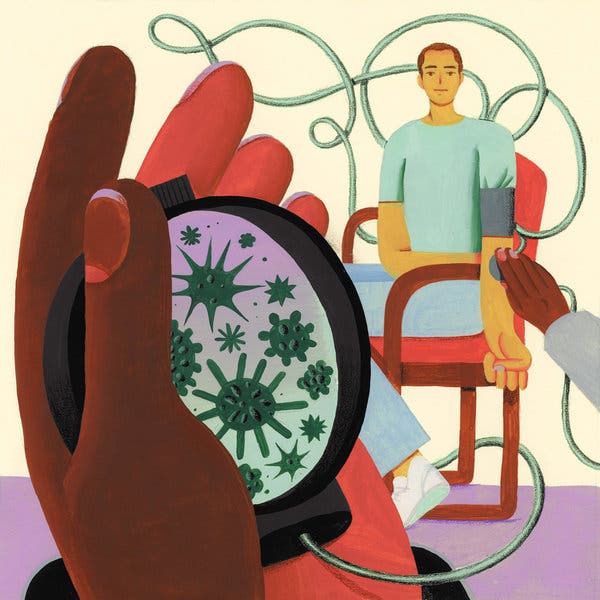 One of the most important benefits of exercise is in how it reduces our risk of developing a number of types of cancer — especially colorectal cancer, which according to some estimates is the malignancy most influenced by physical activity. But how workouts guard against colon cancer remains largely unknown. Physical activity speeds the movement of waste through the intestines, as anyone who has had to hunt for a bathroom during a workout knows. But this does not seem to fully account for the protective effects of exercise. Instead, a small study published in February in The Journal of Physiology suggests we should also look to changes in our bloodstream after exercise.

The new study began with scientists at the University of Queensland in Brisbane, Australia, and other institutions recruiting 20 men who had survived colon cancer. (Women were excluded because menstruation might have affected results.)

The scientists asked 10 of the men to start working out strenuously three times a week: pedaling a stationary bicycle hard for four minutes, resting for three, and repeating that sequence three more times. They trained for a month and then, a few days after completing the program, rested quietly while researchers drew blood. The other 10 men completed the same 4 x 4 interval session, but only once. The researchers drew their blood before, immediately following and an additional two hours after that lone workout.

The scientists then carefully added a tiny amount of fluid from the men’s blood to petri dishes containing human colon-cancer tumor cells often used to study cancer growth. At several points during the subsequent 72 hours, the researchers counted the numbers of cells in each dish. They soon saw substantial differences.

In the dishes containing fluid taken from the men immediately after a single workout, the scientists counted far fewer cancer cells than in those awash in fluid drawn two hours after exercise. There was no similar decline in the dishes from the men who had trained for a month. In effect, something about the blood drawn immediately after the workout was slowing the growth of cancer cells.

The researchers think they may have identified that something in subsequent analyses of the men’s blood. They found a large increase in molecules involved in inflammation immediately after exercise. Inflammation can slow cell growth and reproduction. So a transitory increase in inflammatory markers after exercise might be helping to jam the proliferation of tumor cells, says Tina Skinner, a physiologist who was the senior author of the study.

The implications of these results are both cheering and cautionary. The changes in exercisers’ blood were potent but “transient,” Skinner says. So activities would have to be repeated to provide any continuing protection, and it remains unclear how intense or prolonged that exercise ideally would need to be, or if the effects extend equally to fighting other types of cancer. But even so, Skinner says, “We would recommend that exercise be embedded as part of standard practice for people living with and beyond cancer.”